GVP Sets Goal to Enroll All Scholars for Free College-Tuition 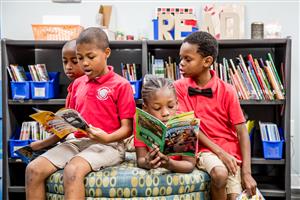 George and Veronica Phalen Leadership Academy(GVP) has set a goal to help support 100% of its scholars in college and career readiness by getting them enrolled in Indiana’s 21st Century Scholars Program. The program gives scholars a golden opportunity to have their college tuition paid in full.

“We are really excited to be able to offer this pathway to the future for our scholars and families,” said GVP Principal, Mr. Lane. “This program has the potential of saving parents up to  $40,000 in college tuition costs, and giving scholars the support they need to get to and through college. We are here to help them open doors to the future.”

The 21st Century Scholars  program provides students with up to four years of undergraduate tuition at any participating public college or university in Indiana. If scholars choose to attend a private college, the state will award an amount comparable to that of a four-year public college– breaking down a huge financial barrier that students and parents often face. The program also guides scholars through academic readiness as well as community service based criteria which ensures young leaders enter college prepared to excel.

GVP has a goal of enrolling 100% of eligible scholars in the 21st Century Scholars Program by the end of the year.  To learn more, click here.