More than 30 third-graders stood inside the gymnasium at Phalen Leadership Academy at Francis Scott Key School 103 on the city’s far eastside on a Wednesday afternoon.

Lined up in rows, with their hands resting on their hips and feet in first position, the boys and girls waited for just the right moment to
make their move. 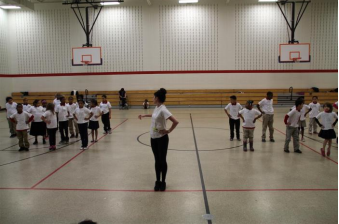 Their tennis shoe- and boot-clad feet stepped, in unison, to the right as the first notes from “Fossils” began to play. The song is one of 14 movements from “The Carnival of the Animals,” a whimsical musical suite by French Romantic composer Camille Saint-Saens.

At the front of the class was Coleen Szulc, demonstrating the moves while calling out ballet terminology with each step taken.

For eight to 10 weeks, teaching artists from the Indianapolis School of Ballet (ISB) have engaged Phalen students in an introductory ballet course, as well as some ballroom and social dances, through ISB’s community outreach program Indy Ballet Classrooms. The free classes were held every Wednesday for 45 minutes.

Many students took to it immediately.

“I was excited when I learned that I was going to do ballet. I think it’s fun,” said Kamor For, 8. “I practice in my bathroom at home because there are mirrors there and I like to look at myself dance in the mirror. I get to see if I’m doing the dances right, if I look good doing them or if I need to work on something.”

Administrators at Phalen, one of several IPS innovation schools, are thankful for the opportunity. “Indy Ballet Classrooms is awesome,” said Vice Principal Greg Wegesin. “What a fantastic opportunity to introduce a skill that our scholars wouldn't normally have access to. Giving them experiences like ballet is the key to their success.”

But ballet and classical music aren’t what you’d expect to see or hear inside an urban school located in one of the roughest communities in Indianapolis. Yet it is by design. Victoria Lyras, founder and artistic director of the Indianapolis School of Ballet, started Indy Ballet

Classrooms to expose youths to classical dance — specifically ballet. The program began in 2014 and is held in at least three schools per semester.

A native of Athens, Greece, who grew up in New York City and attended public schools, Lyras recalls social dances, square dances and Maypole dances as part of her gym activity, and laments the lack of the same in today’s educational system.

“These opportunities are gone; I don’t see them in schools. Very few schools offer music; very few schools offer dance,” said Lyras, who trained at the School of American Ballet and performed professionally with several companies including Pennsylvania Ballet. “I came to this country with nothing. We came with suitcases and some of them were stolen in the process. I went to public schools and I believe in the public education system. It has to be stronger, but I also believe that every child has to have an opportunity to explore the joys of dance, to explore music and the two of them combined.”

While Indy Ballet Classrooms are in schools throughout the city, several Indianapolis Public Schools have latched onto the program. Szulc, director of Outreach & Student Services and ballet faculty at ISB, said it took George Washington Carver School 87 less than an hour to respond to an email request to participate. The school became the pilot site for Indy Ballet Classrooms during the 2014–2015 school year. It was at School 87 for two years.

Principal Mark Nardo said the program actually falls in line with its Montessori curriculum, which emphasizes culture, including dance, music and sports. “It gives kids an opportunity to participate in something they can’t afford or don’t know about,” said Nardo. “This can be a nugget that can plant the seed that this is something they can do.”

Several seeds have already been planted. Some of Nardo’s students are currently on scholarship at Indianapolis School of Ballet, thanks to Indy Ballet Classrooms. Part of the program, according to Lyras, is to provide full tuition scholarships to students who show promise in the art form.
ISB selects between 20–25 Indy Ballet Classrooms students to take an hour class once a week at ISB on scholarship. The goal is to continue to focus more on their classical technique. From those students who continue at ISB through spring and summer, staff members determine if they’re ready for the ballet school’s pre-professional track, providing full tuition scholarships for those who are.

Some students have even performed in ISB’s production of “The Nutcracker” in December and its annual “May We Dance” performance on Mother’s Day.

Not only is Lyras providing opportunities for inner city kids, she’s slowly changing the face of what ballet looks like. The art form, which began in Europe in the French Courts, is known for its lack of diversity.

Lyras, however, doesn’t see color as a barrier. “I grew up in New York in a melting pot and everything I did was diverse,” she said. “It’s about spreading the love of an art form and it should be accessible to all. It has nothing to do with one individual culture.”