Indianapolis, INDIANA – Students at the Phalen Leadership Academy (PLA), a public charter school located in Indianapolis, are getting a head start on
developing 21st -century skills.

Students as young as nine years old are designing and building unmanned aerial vehicles or “drones,” and even creating a working mobile app. 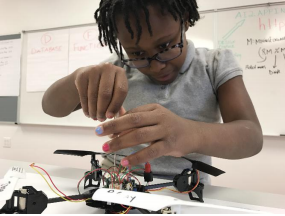 These experiences have been made possible through a new partnership between PLA and a unique program called “STEMNASIUM LEARNING Academy.” The program aims to prepare students to become leaders in science, technology, engineering, and mathematics (STEM) fields by engaging them in hands-on learning experiences from an early age.

STEMNASIUM LEARNING Academy was created by Tariq Dionea Evans Al-Nasir, a former military intelligence specialist, who saw a need to foster a passion for science and engineering in young students. The program is specifically designed to serve children living in low-income communities who would otherwise not have access to high quality STEM learning opportunities.

“STEM is a language,” said Al-Nasir. “What I know about language is that early exposure helps to establish identity and increases the chances of being successfully fluent, exponentially.”

During a three-month pilot program at PLA this past fall, children in grades two through six had the opportunity to explore topics such as software development, electrical engineering, aerodynamics, and more. Using computer software typically found in universities such as the Massachusetts Institute of Technology (MIT), students were able to develop a new mobile app allowing teachers, students, and parents to access school and community resources. The app will ultimately be available for download on most mobile devices. Students also put their math skills to the test in designing, building, and piloting drones similar to those used professionally in the film, construction, and agriculture industries.

Scholars’ achievements in the program will be highlighted during PLA’s Black History Month festival on February 24th, which will include recognition for participating children, as well as a demonstration of studentcreated drones and a mobile app display. Members of the media are invited to attend.

About the Phalen Leadership Academies