INDIANAPOLIS, Ind. -- More Indiana schools are doing better. At least, according to the state's accountability
report.

The report, out Wednesday morning, shows nearly two-thirds of Hoosier schools got an "A" or a "B", up slightly from last year. 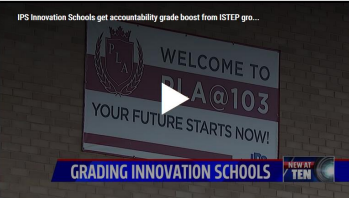 Two of those schools with such drastic improvements were IPS Innovation Network Schools launched by The Mind Trust, Phalen Leadership Academy School 103 and Riverside 44.

Despite that, School 103 principal Agnes Aleobua says students made significant progress catching up students one to three grades behind, contributing to the “A” grade.

“I was hoping for the growth,” said Aleobua. “I knew we worked very hard for that. I was surprised that we made it to be an ‘A’ school, but I think looking at how hard the students and teachers have been working, it shows, it really shows.”

Aleobua says they’ve spent the last three years trying to solve the underlying problems preventing some of her students from learning.

“We really needed to focus on our students’ social, emotional well-being,” said Aleobua. “We’re focused on academics and grades, but a lot of our students are facing very traumatic things at home and we’re asking them to sit down and take a test when something violent happened in their neighborhood the night before.”

Aleobua says the improvement from a zero percent pass rate to just over 12 percent shows that what they’re doing means what they’re doing is working; they just have to sustain it. The founder of the Mind Trust, David Harris, agrees.

“I think the most important thing it tells us is that all kids, no matter what their backgrounds and circumstances, if given the right supports and the right conditions can excel,” said Harris. “We believe that firmly as an organization and I think the results of these innovation network schools really bear that out.”

Harris says they have nine in the pipeline.

Click here, or on the video above, to watch the video.