Those words from Earl Martin Phalen, founder of the George and Veronica Phalen Leadership Academy (PLA) in Indianapolis, represent more than a strategic goal. They are PLA’s foundational priority: the quality of its teachers will be the driver of student success.

Six years ago, Earl Martin Phalen founded what has quickly become the largest African American-run charter school network in the country. In just six years, Phalen Leadership Academies (PLA) has grown from one school to 20, most of them in Indiana but also four in Tampa, one in Detroit, and two schools in Beaumont, Texas. All but two are previously underperforming schools that districts asked PLA to turn around. 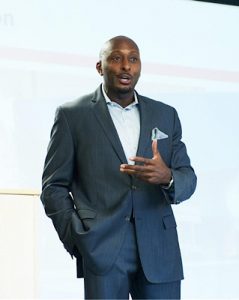 In 2017, all four PLA schools in Indianapolis were rated “A” on the Indiana State Report Card, and two of them ranked 4th and 5th in academic growth in the city. PLA’s school in Merrillville, Indiana, earned the highest growth in the district.

The key, according to Phalen, is effective teachers. The overwhelming majority of PLA students are African-American and low-income — precisely the kind of students least likely to be assigned effective teachers, according to studies. Because urban school systems are often new teachers’ last choices, many don’t find the last 20 percent of their teachers until after the school year has begun.

In contrast, PLA overstaffs at the beginning of the year, so schools can adjust to losses. It builds a cushion of two additional certified teachers at each of its Indianapolis schools, for example. One campus is 114 percent staffed, so educators can be shifted to schools within the network when openings arise. This reserve also gives it the option of releasing teachers who are failing.

Phalen invests heavily in coaching and professional development, to help his success. His academic coaches provide frequent feedback to teachers. “Studies show 70 percent chance of implementation if feedback is within 24 hours of observation,” he explains. So “feedback must be timely.”

His PLA University offers various professional development modules prescribed by coaches, based on their observations of teachers. And his PLA Coaching Cycle offers 12-minute walk-throughs in seven domains, such as culture and behavior management, social and emotional learning, student engagement, and effective lesson components.

To ensure that good teachers return, PLA returning teachers can earn up to a 6 percent bonus, on top of their annual merit increases. PLA opens new schools every year, but as Phalen says, “You can’t outgrow your talent.”

Earl faces great odds in meeting his foundational priority, but if anyone is capable of defying the odds, it is he. Abandoned at birth, he spent his first two years in foster care, then was adopted by white parents in Norwood, Massachusetts, a blue-collar suburb of Boston.

His adoptive mother’s parents were immigrants from Ireland who had often encountered “No Irish Need Apply” signs in Boston.

“During the civil rights movement, my mom said to my dad, ‘I want to be a freedom rider,’” Phalen says. “My dad said, ‘We’ve got seven kids under 19; you’re not going to be a freedom rider.’ She read an article in the Boston Globe that said 70 percent of the black boys in foster care would end up in prison by the time they were 21. So she said, ‘Let’s adopt an African American boy.’”

His parents gave him the middle name of Martin in honor of Martin Luther King. Earl is the youngest of 8; all of his siblings were naturally born from his parents, George and Veronica. And the family now has 50 grandchildren and great grandchildren, 16 of whom are black and most of whom are adopted as well.

At Harvard Law School, he founded an after-school tutoring program, which evolved into a “Summer Advantage” program serving 15,000 kids. In 2009, a fellowship from the Mind Trust — a nonprofit set up by former mayor Bart Peterson to help bring talented educators to the city and support new charter schools — allowed him to bring Summer Advantage to Indianapolis.

When it succeeded, Mind Trust co-founder David Harris asked him to launch a charter school. “If we can do 10 schools and serve 10,000 kids, we’ll do this,” he and his two partners decided. The Indiana Charter School Board gave him a charter for 10 schools, and he named them the George and Veronica Phalen Leadership Academies, out of gratitude to his parents.

Inspired by the success of public charters in Indianapolis, in 2014 the state legislature let the district create “innovation network schools” — district schools with charter-like autonomy, organized as nonprofits. Phalen had only one charter school open by then, but it was so successful that the superintendent asked him to take over a struggling elementary and create the first innovation school.

Autonomy Is the Key

Autonomy also allows PLA to control its school day and year. “We have to be creative in expanding learning time for scholars. At PLA we have seven-hour days for scholars, and we partnered with Summer Advantage for teachers to expand time and reduce summer learning loss. The flexibility in our calendar amounts to an extra 25 days of learning.”

As he opens new schools, Phalen also has to grow effective school leaders. He recently launched a Pathways to Leadership program, to identify, train, mentor, and deploy future leaders to schools within the PLA network. The program has eight future leaders participating in both online and face-to-face training.

Phalen believes all schools can match PLA’s success, if they have autonomy and their leaders are creative. “I think people’s imaginations are too small,” he says with a smile. I think the more people learn about Earl and PLA, the more his ideas will make a tremendous difference for more children in America.