All three schools will launch this fall

Indianapolis Public Schools is opening a new school for new students. Just a week after the IPS board heard a proposal to create a school for students who are new to the country, the plan won approval tonight.

This district will open the new school this fall, targeting the curriculum and programs to better serve immigrant students. In addition to offering specialized instruction for kids learning English, IPS hopes the school will serve as a hub for services for immigrant families as they navigate life in a new country.

The school will serve students in grades 7-9 in its first year and all lower grades to serve kids as young as third grade in fall 2017. 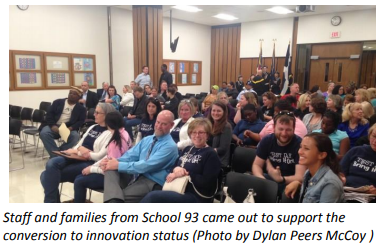 Though initial plans called for opening the school in a section of Northwest Community High School, officials announced Tuesday that the program would be moved to the Gambold building on the Northwest side.

“It’s rare that a proposal comes to the board that everyone supports, and I haven’t heard a negative comment out of anyone about this program,” said board member Kelly Bentley. “I’m very excited.”

After months of discussion, the board also approved plans to convert two successful district schools to “innovation” status.

Beginning this fall, Cold Spring School and School 93 will become innovation schools managed by outside nonprofits under contract with IPS. The school leaders will have flexibility in decisions like what curriculum to use, the length of the school day and how educators use class time, and teachers will no longer be members of the district teachers union.

The schools are still ultimately part of IPS, so the district will receive credit or blame for student scores on state tests. The district will not have control over day-to-day decisions in the schools but if they fail to meet district expectations, the board can end its contracts with the managers.

“We’re not giving our schools away, we’re changing the way they are structured and led,” said board member Sam Odle. “These are IPS schools.”

Cold Spring School, an environmental science magnet that rests on a 39-acre campus near Marian University, will be managed by a new nonprofit organization established by Principal Carrie Scott. The school has a close relationship with Marian, and it is expected to serve as a university lab school.

School 93, a neighborhood school on the East side that’s using the homegrown turnaround model Project Restore, will be managed by the nonprofit Phalen Leadership Academy charter network. Phalen runs a charter school and School 103, which was converted to an innovation school this year.

“I think what’s fascinating is the possibilities of taking some of the best practices from Phalen Leadership model and then implementing and infusing that into Project Restore,” said Superintendent Lewis Ferebee. “It could be something very special.”

The plan for converting School 93 raised concerns for Bentley, who said that Indiana law requires staff at a successful school to apply for conversion to innovation status. Although daily management at School 93 is expected to be handled by the current principal and Project Restore staff, the application was submitted by Phalen.

“I’m a huge supporter of giving schools more autonomy and more decision making authority,” Bentley said. “My no vote really has to do with policy and procedure.”

Cosby also voted against the conversion.

“I’m just of the mind that if it ain’t broke, don’t fix it,” said Cosby at the board meeting Tuesday. “I don’t see Project Restore as being something that’s broken. I see it as being completely effective.”