The state’s education debate has been dominated by distractions, focused on politics and not children. So a visit to an east-side school is a welcome reminder of what our debates should be about.

I had a feeling Earl Martin Phalen would provide me with the hope I was seeking. Hope we all need after months of depressing headlines about Indiana’s screwed-up standardized tests and the general lack of focus at the state level on the issues that truly matter to children.

Time and again in recent years, I’ve turned to Phalen and other inspiring educators and education leaders when I’ve been in need of a reminder of the transformational work that can be done in schools, and that is being done in so many schools. Time and again, Phalen has delivered. And he did so again Monday when I visited him at an east-side school that has been marred by a generation of failure and that is set amid some of the city’s most violent streets.

Yep, that’s where I found hope. 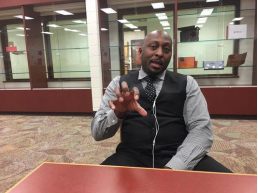 “We’re focused on instilling in our scholars the idea that education is a passport,” Phalen said as we walked the halls at Phalen Leadership Academy School 103. “It’s a passport to the future. It’s a passport to achieving your dreams. And with more and more kids growing up in poverty, we all have to understand that what we need to do is double down on education.”

All you have to do is walk into the building to see what’s special about it. An elementary school that suffered through years of dysfunction and even violence, through disrepair and tremendous academic failure, is now filled with order and ambition. It’s driven by a belief that cleanliness, fresh paint, energy, academic rigor and smiles send important messages to students and parents. It’s based most of all on the philosophy that children can overcome their circumstances.

Amazingly, this is being done through a partnership between a traditional school district and a charter school operator.

Imagine that next time you read about a bitter education debate, or about different education factions and their inability to get along. Please remember that it’s possible to put all the distractions aside and join together for the sake of students.

Students like some sixth-graders at School 103 who are reading at a kindergarten or first-grade level.

“You can’t send them into the world that way,” said Phalen, whose team is in its first year at the school. “So we feel a tremendous sense of responsibility.”

Phalen operates a charter school at 23rd and Illinois streets and first came to Indiana seven years ago when The Mind Trust offered support for his summer learning program. Through a new state law, IPS agreed last summer to allow Phalen to take over the operation of School 103, which also is known as Francis Scott Key Elementary. The result has been a diverse mix of ideas and an infusion of energy.

The halls now are quiet. The lunch room is orderly. Students now run a morning announcement show and are given more leadership opportunities. Participation on the school’s basketball teams has skyrocketed. Deeper relationships with parents are being built. Intense work is being done to help students catch up academically. An entirely new staff has taken over, and there are now two educators in every classroom.

For more than two hours, Phalen and I walked and talked, popping in classrooms, the gym and the lunch room. He frequently stopped to say hello to students and to encourage them to make “good choices” if they were violating a rule. He introduced me to a janitor who coaches the basketball teams and encourages students to take on responsibilities in the cafeteria. We talked with one of the school’s parent advocates, who builds relationship with families, most of which face tremendous challenges.

The advocates have helped families facing eviction and hunger. They’ve addressed concerns about curriculum and even allowed struggling families to come in after hours to do their laundry. Whatever it takes to give a child more of the stability needed to succeed in the classroom.

Phalen talked about work to improve safety in the school, a heartbreaking issue after years of problems, and to make sure enough programs are created so “every child has a chance to excel at something.” He talked about new technology, field trips and other efforts to create the type of experiences that are routine at some schools but not always in those serving students facing the biggest challenges. In a school where most children live in poverty, he said, “We have to show them that the world is bigger than the four blocks between their home and school.”

And, yes, test scores are important here. Hugely important in a school with some of the state’s lowest academic results. So, yes, we talked about that. But only after Phalen talked for two hours about the school’s culture and its work to broaden student horizons. And only as he talked about what those scores represent.

“Our job is to raise good kids,” he said. “And a huge part of that is making sure children and young adults have the academic skills they need to succeed. You have to have that academic foundation. But you also have to be a good human being. So while kids have to know how to read and write, we want to make sure we are helping to raise really good young people who also have self-discipline, self-determination and visions for their future.”

In other words, an education is about more than just test scores.

It hasn’t always been easy. Children have come to school with drugs and knives, and many are dealing with overwhelming family issues. Before the school doors opened in August, Phalen parted ways with the first principal he’d selected. The school has been the target of some who don’t like the private resources that back it up, or who have problems with education reformers in general, including Phalen’s backers at The Mind Trust.

But those are distractions, he said. Here’s what matters: Enrollment has exceeded expectations as more families have responded to the work being done in the building. “What we’re doing won’t be easy,” said Phalen, whose organization recently agreed to also help oversee nearby School 93. “But as long as you have every adult in the building buying into it, it can be done.”

For the sake of so many children, it must be done.

So, yes, there have been a lot of setbacks in the push to improve Indiana’s schools. The debates have at times been ugly and driven by issues that  don’t mean much to teachers in the state’s classrooms or to the students they serve.

But amid that disappointment there also are plenty of places where you can find hope and optimism. Plenty of schools where great work is being done. Plenty of classrooms filled with teachers and students who are overcoming tremendous obstacles. It’s inspiring. And it’s where our attention should be focused.